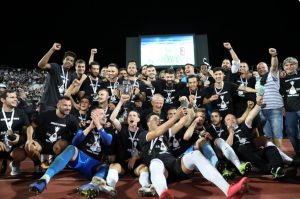 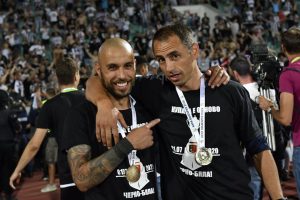 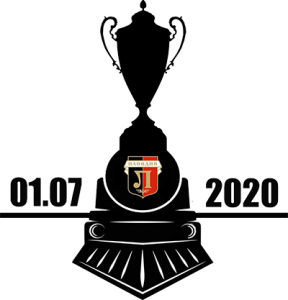 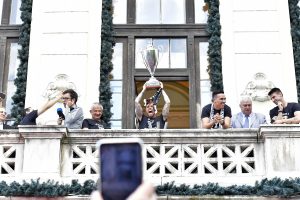 Lokomotiv “was born” on 25 юли 1926гunder the name of Plovdiv Sportclubas two local entities (Karadzha and Athletic) got united. The story tells that the club was formed in the very heart of the city and had had numerous supporters even before winning first trophy in 1936.

Lokomotiv had an explosive/high-speed/speedy 1930s. The team topped Second City Division (33) and First Elite Division (36 and 38). Then under Hungarian Laszlo Klein, trainee to famous Englishman Jimmy Hogan, entered the prestigious National football league to play against the nine best squads in the country. Being only team from South Bulgaria (1939/40), Loko successfully competed there for two campaigns until the league got cancelled.

1940s were a decade of immense performance and record settings. Being a National Cup finalist on October 3rd 1942 Loko received a never seen before fan support as more than 3000 people flooded the stadium in Sofia. Ticket revenue from that final game was unprecedented for the time. Close to the end of the decade the name of the team was shortly changed to “Slavia Chengelov”. However, that period was absolutely fundamental for the history and the culture of the black-and-whites. Due to Political decision reorganizational processes overtook all sport structures in the country. A so called centralization Or belonging to certain state working unions Was prescribed to all teams. In this manner, the team from Plovdiv was entrusted to the State Union of Railway and Seafarers (which later included only the railway structure). Thus, finally the name “Lokomotiv” came on spot/place. This unification process secured resources for developing existing and new sports infrastructure in the cities. Namely in Plovdiv, by that time the first imposing town stadium was built.
Lokomotiv (under various names) ended up the 40s having played 84 official games with a goal difference of 157:129. As a result of this dynamic period, the team was pronounced “biggest sports organization in Plovdiv”.

After a rapid squad change Lokomotiv got relegated from A league to second division in 1955. During the two years spent in tier 2 the team performed well and even managed to reach the National Cup final (1960) and was back up again by thousands of supporters during the final. The beginning of the 60s saw Loko advancing to the top level again and winning bronze (1968/69).

In 1971 Lokomotiv played at the Cup final for 5th time in the its history. Later, in the following campaign the black-and-whites became vice-champion of Bulgaria.

The 80s finally brought the first National Cup title. The final (played in the capital) is believed to have hosted about 15000 Loko fans.

1900s - time of ups and downs. Loko won bronze medals again in the 1991/92 season, but later ended up in the second tier. The 2003/04 campaign marked first Championship title for Lokomotiv. Plovdiv had an impressive celebration of the achievement as more than 40000 people joined the cheer in the streets and at the stadium. Due to complex circumstances, the actual award would take its place in the trophy room at Lokomotiv stadium much later (2019).

A date to remember - 15.05.2019! On that day Lokomotiv ended winner at the Bulgarian Cup final against city rival PFC Botev (Lokomotiv 1:0 Botev). Slovenian Alen Ozbolt scored a famous since then heel goal after being set up by number 77 - Ante Aralica. A metal casting of Ozbolt’s heel is to be seen at Lauta.

Europa league qualification stage clashes followed up. Third round met Lokomotiv and FC Spartak Trnava. After 2:0 in Plovdiv and 3:1 in Slovakia the black-and-whites advanced to the next game to loose to French RC Strasbourg Alsace (0:2 agg.).

The 2018/19 campaign write its name with golden letters in the history of Lokomotiv. The team under coach Bruno Akrapovic brought the Bulgaria Cup to Lauta on May 15th 2019. At the final in Sofia Loko defeated city rival Botev Plovdiv by 1:0. The famous winning heel goal by Alen Ozbolt is to be remembered for years to come!

July 1st 2020 - the Cup is ours again! Lokomotiv won the Bulgarian Cup trophy for a second season in a row! The black-and-whites clashed with PFC CSKA-Sofia at the final and became winners after penalty shoot-outs. Momchil Tsvetanov became the third player in Bulgarian football ever who has won six Bulgarian Cup trophies in his career. He was right to score the 5th and winning penalty.

OFF TO CAMPING IN POMORIE